Fort Wayne, Indiana — While Thursday’s competition at the NWCA Multi-Divisional National Duals was fueled by upsets, traditional powers settled in on Friday where three championship streaks continued as the finals wrapped up at the Allen County War Memorial Coliseum in Fort Wayne, Indiana. First-time winner Campbellsville, however, stole the show with its championship in the women’s division.

Hosted by the NUWAY, the NWCA Multi-Divisional National Duals is presented by Applied Silver, InBody, Theraworx and the United States Marine Corps. 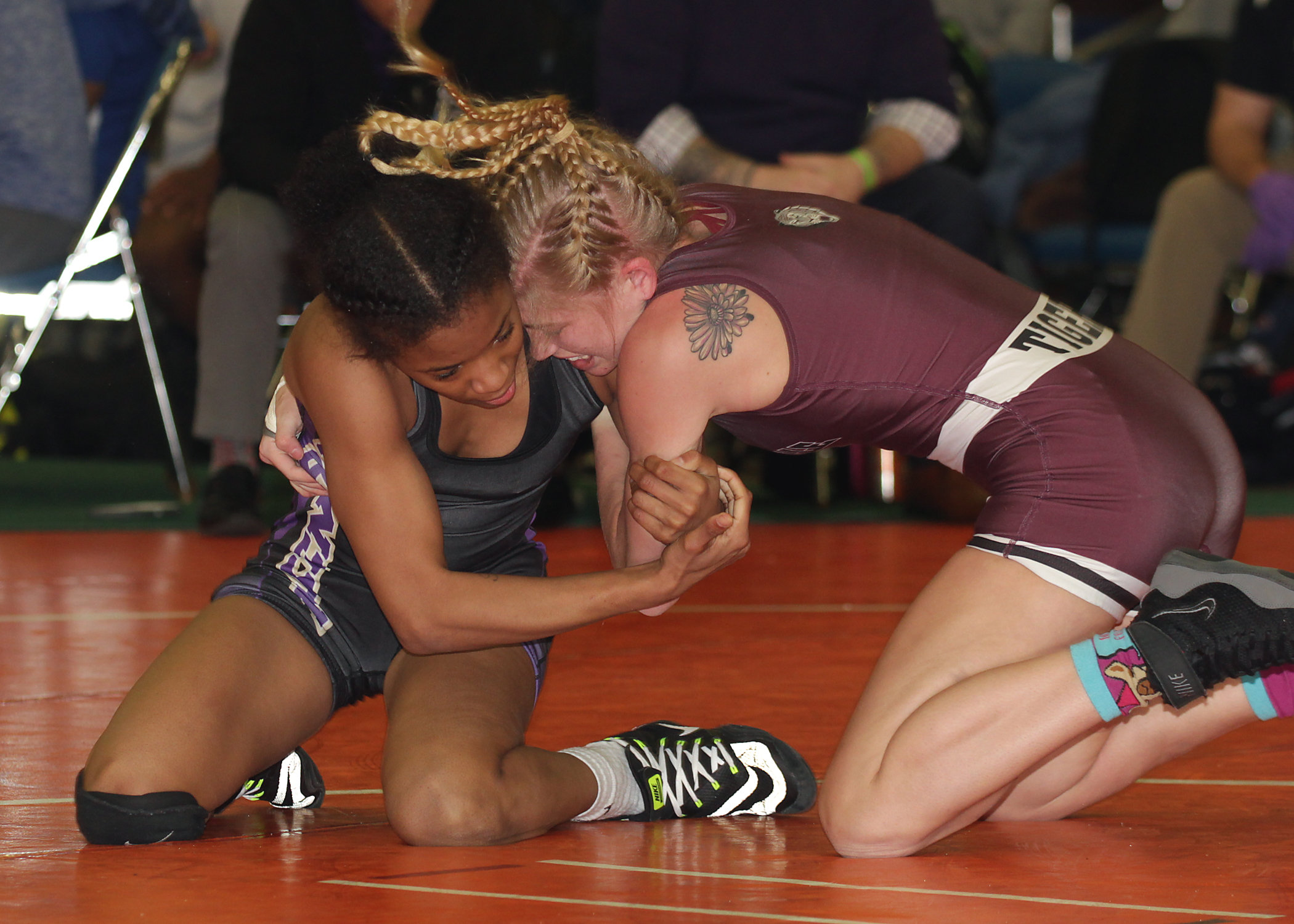 The Lady Tigers of Campbellsville are the new queens of the National Duals. A down-to-the-wire finish gave coach Lee Miracle’s team the school’s first National Duals championship in any division with a 24-19 win over second-seeded McKendree.

It was truly a tale of two halves as McKendree jumped out to a 17-4 lead after winning the first five matches. The WCWA competes using international freestyle rules, allowing teams to score team points in a loss. Some lineup shifts by Campbellsville saw several wrestlers bump up two weights to maximize matchups including Grace Bullen, who went up to 143 from 130, and three-time WCWA champion Kayla Miracle, who went up to 155 from 136. Koral Sugiyama started Campbellsville’s roll of five straight wins with a fall over Brenda Reyna at 2:35 at 136.

Campbellsville’s Mariah Harris scored a 9-9 criteria over All-American Brandy Lowe at 170, putting the pressure on 191-pounders Kaitlyn Hill of Campbellsville and Destane Garrick of McKendree. Needed a shutout, a technical fall or a fall to win the dual for her team Garrick controlled the action early, but Hill hit a pair of four-point moves to pull out a 13-13 criteria victory and seal the win for Campbellsville. 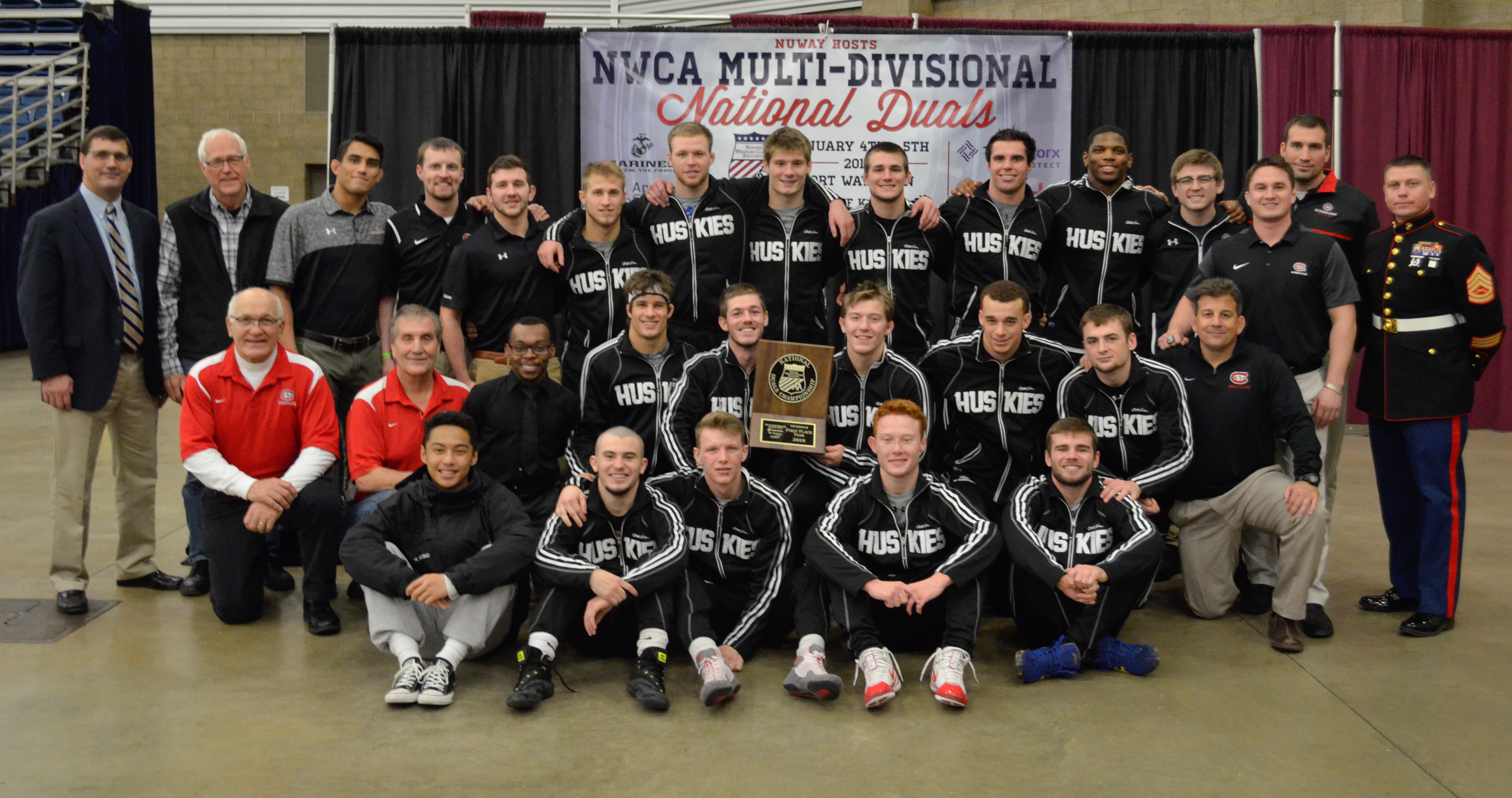 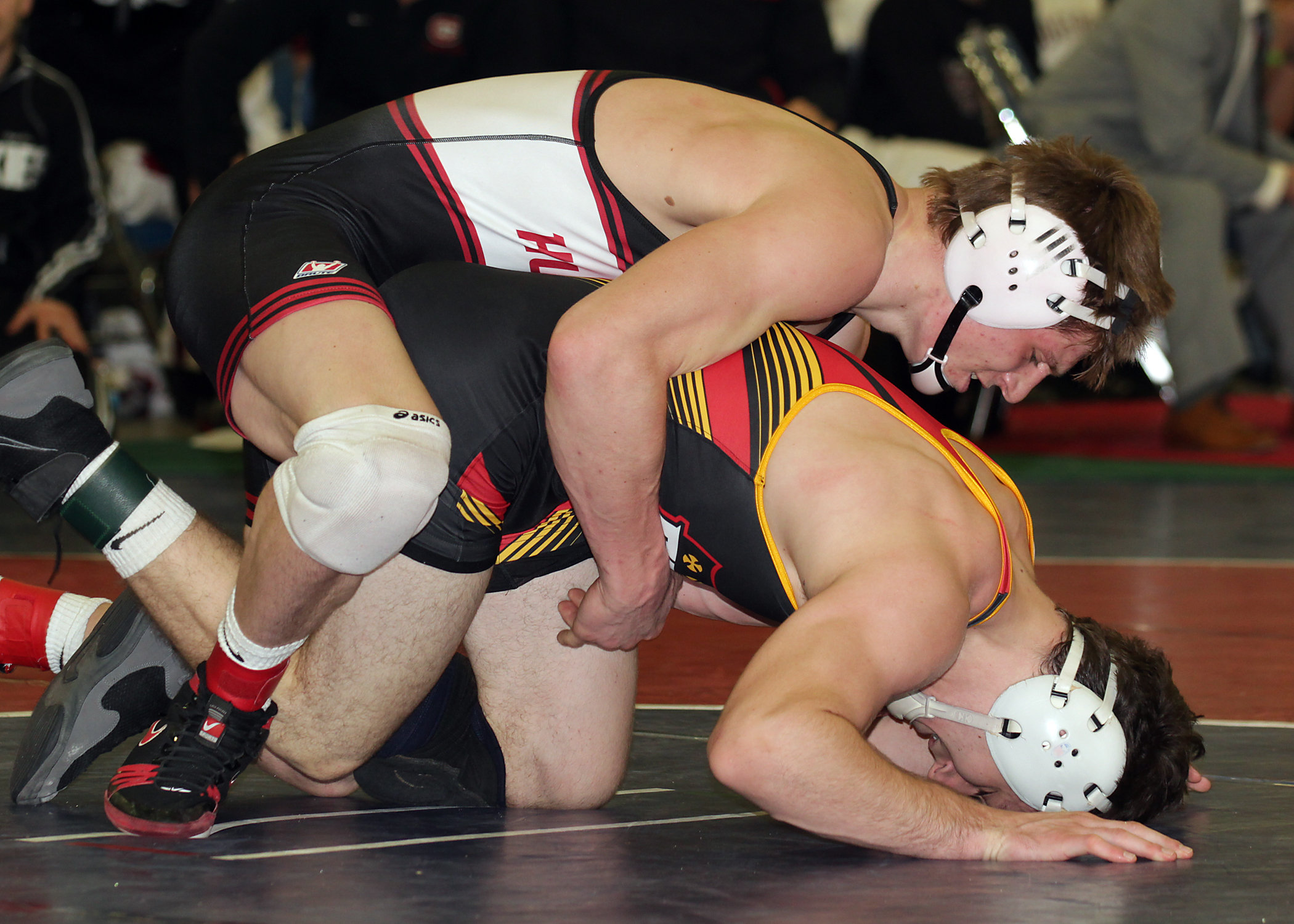 Seton Hill’s day ended in disappointment after a back-and-forth semifinal which saw the Griffins top conference rival Gannon in the semifinals 19-18 on criteria. St. Cloud State, the only seeded team to place in the top four, finished the event 34-6 individually.

Nebraska-Kearney, which fell 21-12 in the semifinals to St. Cloud State, topped Gannon 34-12 for third, while Notre Dame College beat Central Oklahoma 19-12 for fifth and Upper Iowa beat CSU-Pueblo 26-15 for seventh.

Division III
Wartburg’s seven-year run atop the National Duals in Division III came to an end at the hands of longtime rival Augsburg. The Auggies split 10 matches with the Knights, but falls by David Flynn at 141 pounds and Lucas Jeske at 165 pounds were vital in the 21-17 victory. 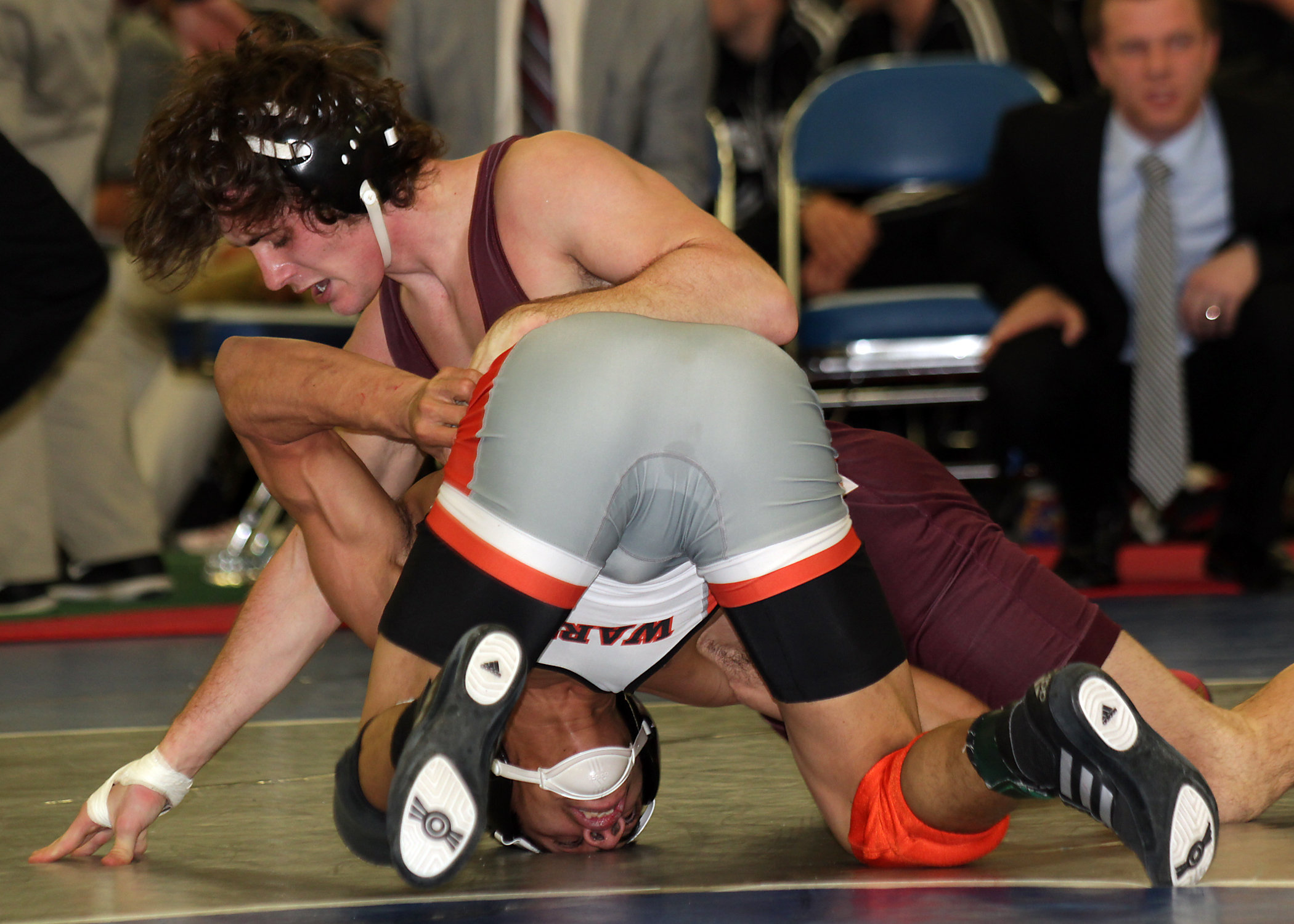 It was the 11th time the two teams have met in the Division III National Duals finals and the win on Friday gave Augsburg a 6-5 lead in the overall series when the teams meet in the championship final. Wartburg has 11 titles in the event, compared to the six won by Augsburg. Wartburg has reached the title match in all 17 years of the Multi-Divisional format.

Augsburg opened winning the first three bouts, highlighted by Flynn’s fall over Martine Sandoval. Wartburg would chip away at the lead after wins by All-Americans Cross Cannone and Logan Thomsen before top-ranked Jeske picked up a fall late in the second period to put Augsburg handily in the lead. Sebastian Larson’s 6-4 win at 184 pounds clinched the win for coach Jim Moulsoff’s Auggies, who had to get past a scrappy Johnson & Wales team just to make the final.

Augsburg and Wartburg will reacquaint themselves in the annual Battle of the Burgs dual on February 1 in Waverly, Iowa. 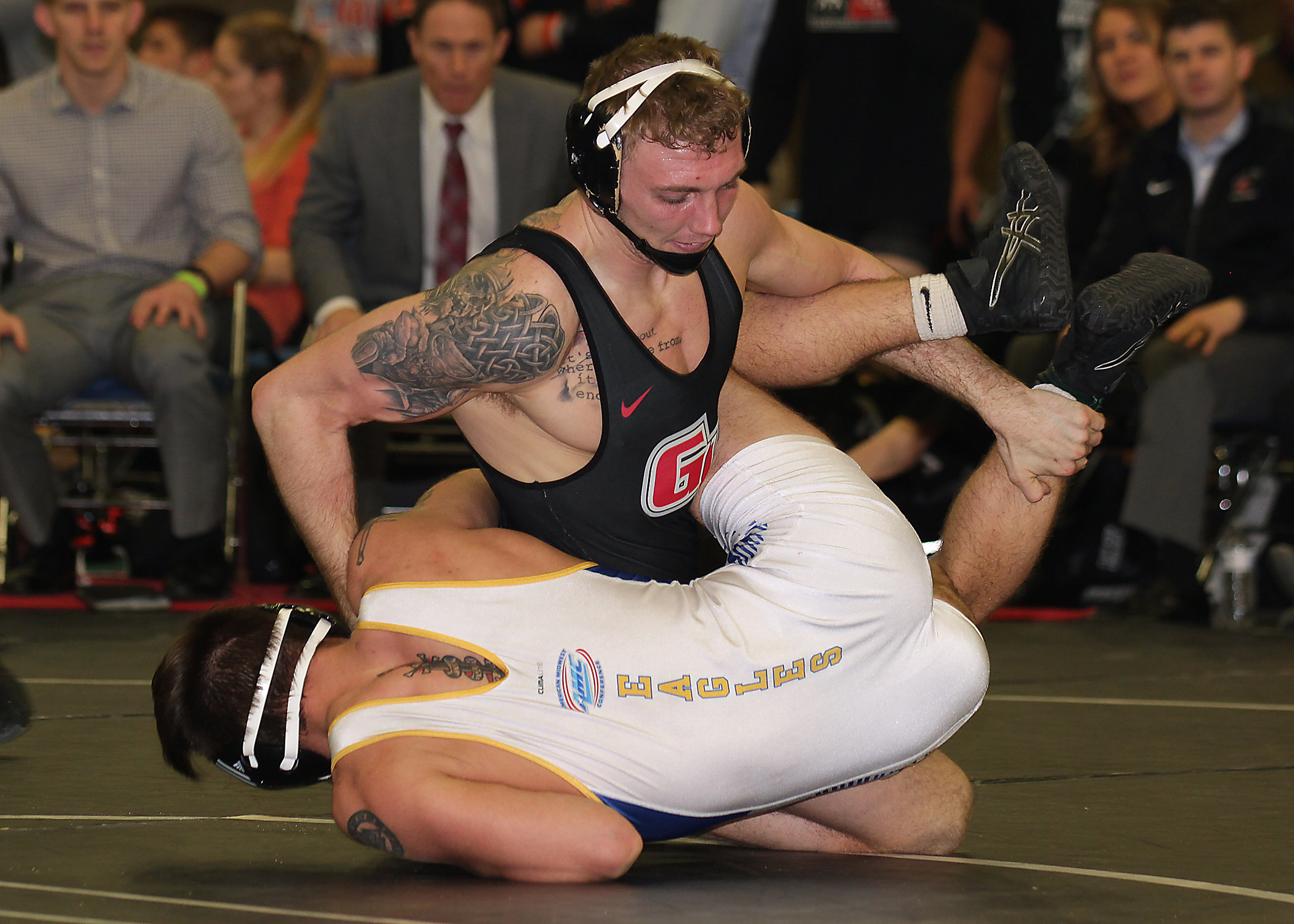 Grand View’s dual meet streak has been impressive. The Vikings have won 60 straight duals and 89 of 90 duals overall since the start of the 2011-12 season. The lone blemish was a loss on November 7, 2013 at Division I Iowa State. Now in the program’s 10th season, Grand View has lost just nine duals in school history.

Life earned its best finish in school history with a 27-6 win over Missouri Valley to earn third place. University of the Cumberlands topped Indiana Tech 44-3 for fifth while Embry-Riddle beat Campbellsville 22-15. 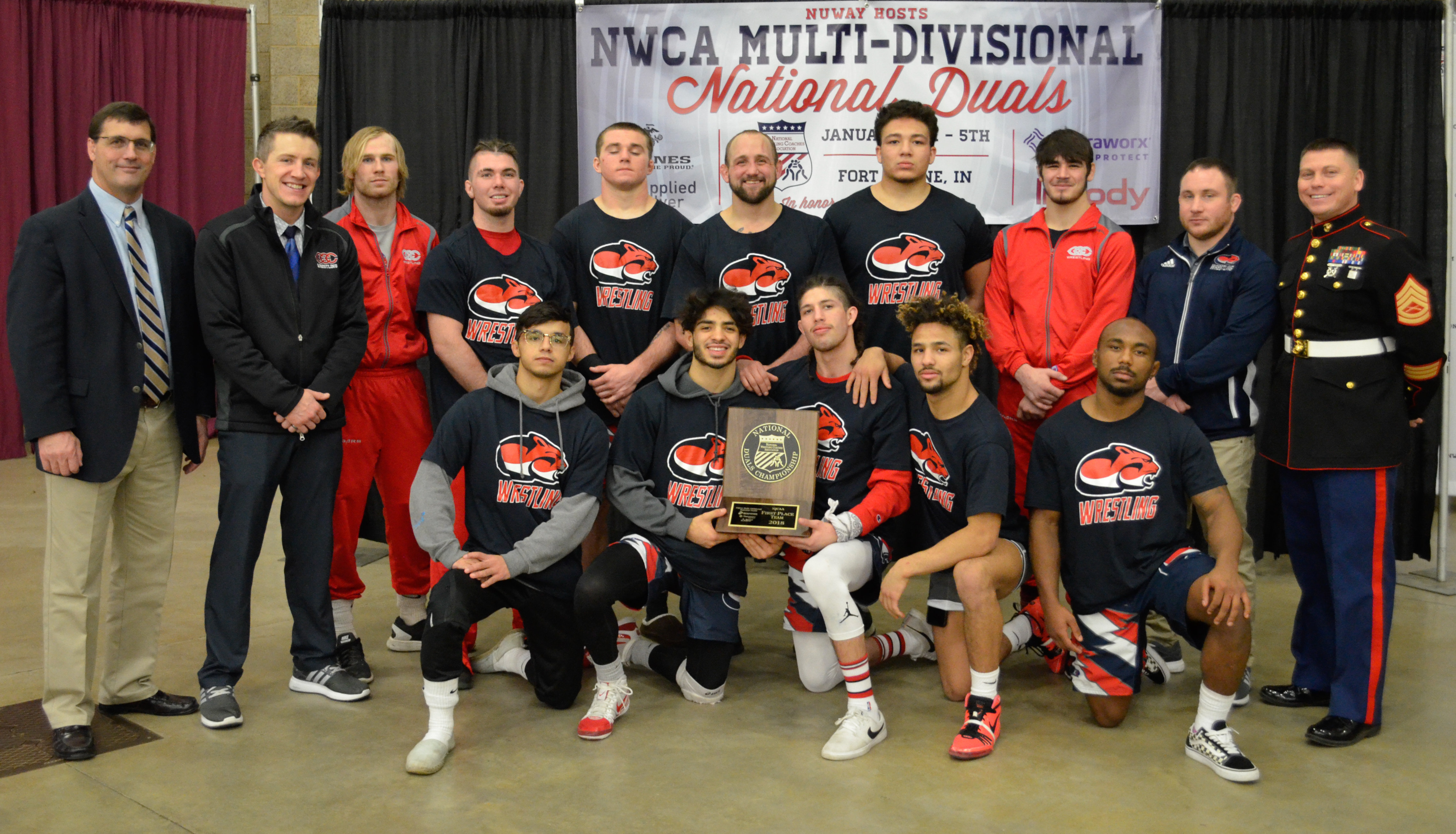 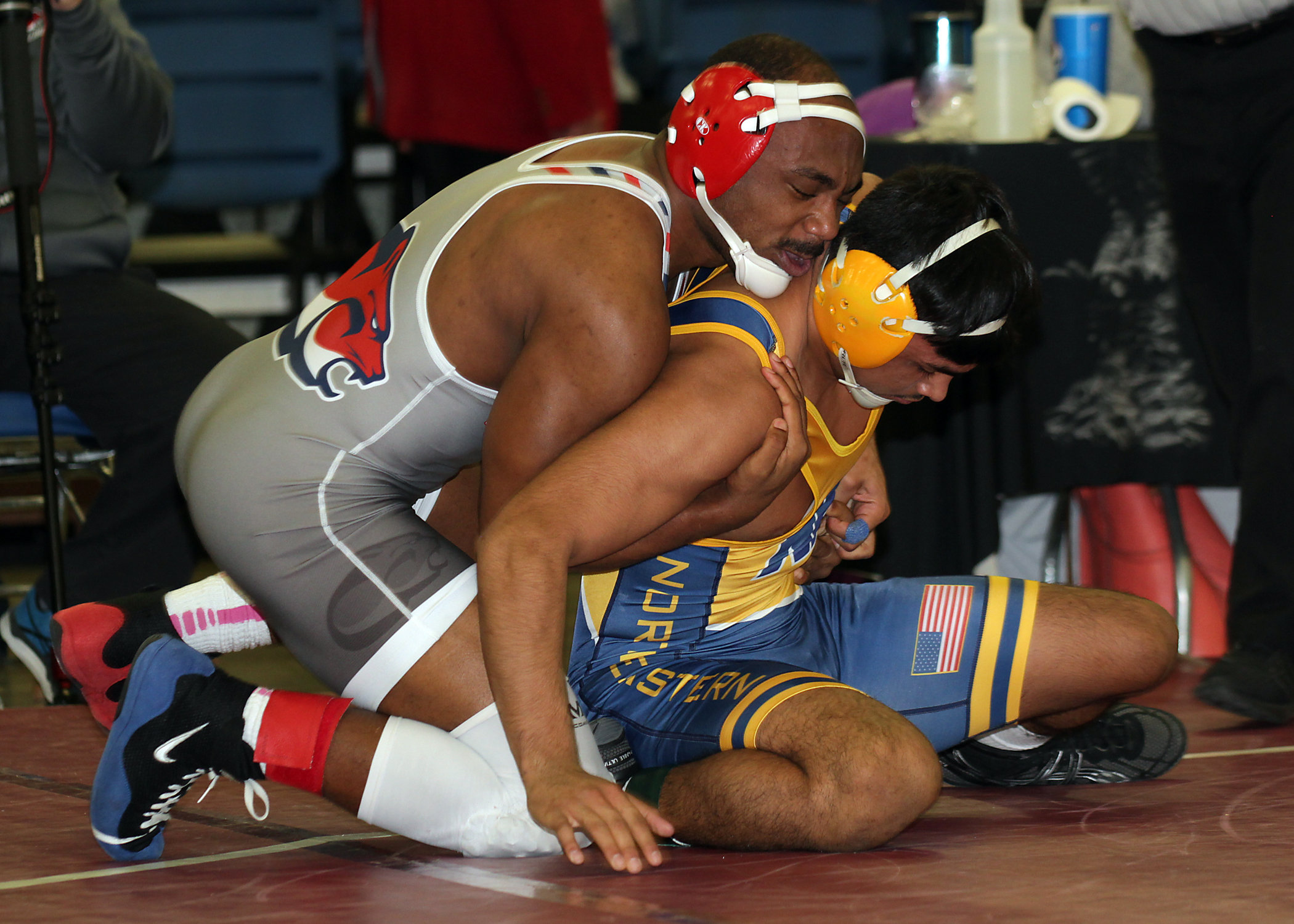 The key for Josh Rhoden’s squad came with four straight wins between 149 and 174 pounds.
At 165, Clackamas’ Dayton Racer beat NEO’s Wyatt Jordan 10-4 in a matchup of returning national champions. Racer, last year’s champ at 157, trailed early and with the score tied at four with just over 30 seconds left, Racer scored a takedown and four nearfall points to pick up the victory.

Clackamas’ top-ranked Dylan Reel needed overtime to get past Devin Crawl at 174 pounds, while Gage Harrah is sure to break into the NJCAA rankings after his 48-second fall over Gus Boyd at 197 pounds.

The title is Clackamas’ sixth overall. The Cougars previous won the NJCAA National Duals title in 2011.